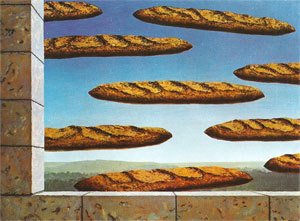 The title for “Tales of the Golden Legend” comes from a Rene Magritte painting of loaves hovering outside a window. There was a major retrospective at the Menil Collection in Houston in 1992, and I mined Magritte imagery for a number of stories (most of which were unpublishable messes). The painting’s title refers to a medieval book on saints, but I didn’t know that when I wrote the story.

Soon after I moved to New York City from Austin in early ’95, I took a writing class with Carol Emshwiller. I met Carol through mutual friends and had read some of her short stories. The class was for beginning writing—I wasn’t a beginner, or at lest was less a beginner than some, having taken creative writing classes in college and attended a summer workshop. But, I was a beginner compared to Carol (still am and always will be…). She gave the class several writing exercises, some of which became “Tales of the Golden Legend”. The story is in four parts: Prolog: Bread, The Bread Dialogs, The Sound of Crust, and Epilog: Bread Aria.

Prolog: Bread began as a study in objective viewpoint, hovering outside of the characters, observing, showing a character’s emotional state through description of their actions.

The Bread Dialogs came out of an exercise in writing dialog. I decided to create a person who could hear the speech of bread. The character observed in the prolog emerges with a life, job, and a new-found relationship with bread.

Epilog: Bread Aria wasn’t part of an exercise, but I wrote it for the class. I wanted something to end the story-suite, hoping to make the collection of separate pieces work as a whole. I returned to the objective viewpoint of the prolog but, where the prolog was a camera that observed and listened to the people, this camera could also hear the bread.

The story sold twice, first to Back Brain Recluse, in fall 1998; I was paid for it, but the magazine folded before publishing the story. I then sent it to Andy Cox of The Third Alternative, who published it in 2002. It has received a lot of favorable attention, mostly from other writers. However, one reviewer of the Third Alternative issue had problems with it. He said he had to force himself to keep from laughing while he read it. Someone else posted on a writer’s message board that the story made him cancel his subscription.

Thus ended my bread-in-fiction phase, although I have a fragment of a story called “The Baker” that I may finish someday.

All contents copyright © 2021 Robert Wexler except as noted