Two people who meant a lot to my creative development have died in March, the same month in which I was born. Jack Hardy, March 11, 2011, and now Lucius Shepard, March 18, 2014. I know that the dates are meaningless, but I can’t help attributing meaning to the coincidence.

I’ve written about Jack here and here. Jack and Lucius both taught me some things about being a writer, being a creative person in the world. They were both large figures (Lucius physically, Jack not). They were people who didn’t like crap being revered as art and didn’t mind talking about it. They could alienate people. They both alienated me on occasion. But that doesn’t make me miss them less. They also would have been amused at some of the eulogies offered up, some by people they had no use for. And perhaps embarrassed by tributes from people they cared about, like Michael Swanwick’s beautiful post about Lucius here, or David Massengill on Jack.

Jack and Lucius never met and likely never knew of each other’s existence. I could have, but never did, give either of them something to read or listen to. I didn’t know if they would like it. Lucius wasn’t much interested in folk music, though I think he would have appreciated Jack’s art of language. Jack probably read Lucius’s introduction to my novella, In Springdale Town, but I can’t remember if we ever talked about Lucius and his fiction. I invited both to my wedding. Jack came, and sang his incantatory “The Wedding Song” from his album The Hunter. I don’t think Lucius ever acknowledged receiving the invitation, which was okay; I hadn’t expected him to come, and I didn’t think the town would have been large enough to hold both of them. Also, Yellow Springs wasn’t a place Lucius wanted to visit; his ex-wife went to college here.

Lucius taught my third week at Clarion West in 1997. Clarion is a six-week workshop mostly for fantasy and science fiction writers. I imagine it’s not an easy job. There are egos involved, and exhaustion, and a lot of writing. Some teachers are more aloof, some take on a role of parent or guardian, some bring the bourbon. But Lucius didn’t just drink with us. He offered critiques, he pushed, he advised. For my story “Suspension,” which I wrote the first week and he read later, during his week, he recommended changing it from third to first person, a change that led the revisions along unexpected paths and to eventual publication. His introduction to In Springdale Town was a mini-essay about the problems of teaching an intense group of individuals and the perils of attempting to predict success. Some reviewers had problems with the introduction, not understanding (or not caring) that it was a glimpse inside him. Reading it always makes me feel better.

Lucius experienced a multitude of health issues over the last few years, but always appeared ready to fight back and return to health and productivity. This time, he didn’t.

I’m tired of writing about people who died. 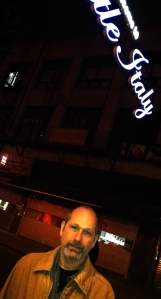 Being true to the spirit of this blog, I should just say, I’m back, with, at most, a photographic accompaniment, and let the reader infer that I must have been somewhere. Instead, I’ll amble along for a few more words, perhaps even an entire paragraph. (And, are there partial paragraphs, isn’t any group of words followed by a line break considered to be a paragraph? But I digress.)

I went to New York and read a section of my roughly-completed short novel, The Silverberg Business, at the New York Review of Science Fiction reading series on March 11, and the next night I appeared on WBAI’s Hour of the Wolf radio program, with host and elocutionist Jim Freund. That bit of fun was in the 1–3am time-slot (not my favorite time to be awake). I read a classic Wexlerian story, “Tales of the Golden Legend,” available on my website here.

The NYRSF event was with Chandler Klang Smith, author of Goldenland Past Dark, which I’m looking forward to reading. She read from a cool-sounding novel-in-progress. It was a fun time, attended by a good-sized group that included old friends and a lot of strangers.

My reading was on the third anniversary of Jack Hardy’s death, so on the show the next night Jim played a couple of his songs and “Jack of Hearts,” a tribute song by Tim Robinson. The Hour of the Wolf show is archived and stream-able for two weeks from the date of the show (March 13).

Aside from reading, I ate. That shouldn’t be surprising. Ate brilliantly-spicy stuff at a newish place called Hot Kitchen, and also Xi’an Famous Food, and others.

I walked a lot. I bought bagels to take home. I saw friends. I didn’t see one friend because I went to the wrong place and didn’t have his phone number, didn’t even know if he had a phone (I blame that on being exhausted by staying up late for the radio show.).

I also found out after it happened, that my friend Mike Laureanno came in from Providence to perform at the same time as my reading. There’s a video of it here.

(note: I selected writing as one of the tags for this post because whenever I use that tag I get multiple likes by people who appear magically and probably don’t read the post or have any idea who I am.)

Stepan Chapman died. I knew him only briefly and not very well. His novel, The Troika, was an amazing piece of wacky and thoughtful weirdness. I hadn’t seen him in several years. He had a starring role in the The Thackery T. Lambshead Pocket Guide to Eccentric and Discredited Diseases, a book put together by Jeff VanderMeer & Mark Roberts. Writers were asked to create a story built around a fake disease. I wrote a letter (as Dr. Wexler) to the fictional Dr. Lambshead begging him not to publish the Pocket Guide. Stepan incorporated my letter into the history of the Pocket Guide, treating Dr. Wexler as the villain, always stealing Dr. Lambshead’s research, etc. We did some readings together (I couldn’t see him, but was told that when I read my Dr. Wexler letter, he would make silly faces to the audience to mock me).

I’m at work, listening to “Sensorium” an episode from Flotsam Beach, a series of podcasts that Stepan did. I’ve only just discovered them. In which he reads from Guy Murchie’s The Seven Mysteries of Life, interwoven with a variety of sounds.

“In this sequel to Leeuwenhoek’s Lenses, Stepan reads more pages from Guy Murchie’s The Seven Mysteries of Life, in order to explore the sensory apparatus of the animal world.

Protoplasm. Did we discover it? Or did it discover us?

After a year of imaginary broadcasting, Flotsam Beach is still asking The Big Questions.”

The combination of his reading style and material, plus background music works to make listening to the program oddly stimulating and soothing. Plus, it’s nice to hear his voice.

I’ve only recently heard the music of Rhys Chatham, particularly his one-chord orchestra “Guitar Trio.” It’s an incredibly mesmerizing and satisfying piece. He performs it with varying ensembles. In 2007, he played different cities with different line-ups, with the results released as a 3-CD set, Guitar Trio Is My Life!. Here are a couple of versions of “Guitar Trio” from YouTube.

The title, for now, is The Silverberg Business. Which is purposely Dashiell Hammett-ish.

P&C Out of Print

It appears that the cheaper edition of The Painting and the City is out of print. The expensive one is still available.

Posted in The Painting and the City, Writing | Leave a comment

Just came across an interesting essay from June 2012 by Matt Cheney on Robert Aickman’s story “The Stains.” It’s once of my favorite Aickman stories.  Cheney gets extra points for using the word ineffable.

There’s a great piece on the NPR website about a reissue of one of the Big Boys’ records (article + video interview with surviving founding members Tim Kerr and Chris Gates). From March. Which is when I meant to post something about. People often overlook the March-like quality of July.

I don’t know if there was anything on the radio. NPR does stand for National Public Radio, not website with video. But that’s okay. It’s not like I ever heard their music on the radio.

Available from Light in the Attic Records.

I’ve written about the Big Boys before. And maybe I will again.