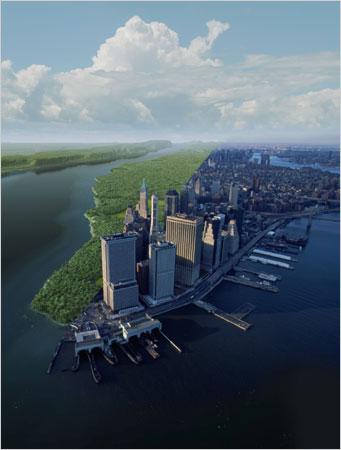 A friend of mine sent me a link to this picture of Manhattan half urban/half made over into its natural state.

It came from a New York Times article here.

The article references the Mannahata Project, which is also the source of the photo. According to the website: “The aim of the Mannahatta Project is to reconstruct the ecology of Manhattan when Henry Hudson first sailed by in 1609 and compare it to what we know of the island today.”

There’s a book coming out in May called Mannahatta: A Natural History of New York City and an exhibit at the Museum of the City of New York. The Mannahatta website talks about some neat stuff, like an interactive map that allows you to overlay the contemporary street grid on the 1609 landscape.

I stumbled on the Mannahatta site at some point during my research for The Painting and the City, but at the time, the site didn’t have much on it and I forgot about it.

In my novel, there are many references to Manhattan Island’s past topography, streams, hills, the Collect Pond. The sculptor-main character becomes fixated on the idea of Manhattan Green and creates a diorama combining an urban downtown that ends at the Dutch wall that is now Wall Street and a green and natural landscape above the wall. I also have a situation in which art can be used to affect what it depicts, if the necessary complex magical elements are used. So for the cover art, I was interested in showing the city being broken, with a landscape emerging in places.

END_OF_DOCUMENT_TOKEN_TO_BE_REPLACED

I’m home, snowed in, and posting a note for “Suspension,” the first story in my chapbook collection, Psychological Methods To Sell Should Be Destroyed.

In 1997 I attended Clarion West, an intensive, six-week writing workshop in Seattle, for science fiction/fantasy/horror writers-and also for people like me, who aren’t exactly sf/fantasy/horror but aren’t realism either. Each week the workshop has a different writer or editor leading it, and the stories are critiqued by the other participants and that week’s leader.

The workshop was important both for my writing and because of the many friendships I made, with my fellow participants, instructors, the workshop organizers, Seattle-based writers who helped out at the workshop, etc. Clarion has the reputation of starting careers, starting marriages, ending marriages, and many participants give up writing after they leave the workshop.  I didn’t have a problem keeping at my writing.  But my Clarion experience did make me doubt whether I had any place in a genre best-known for elves and spaceships, neither of which I have an interest in writing about. At that time, no one in the genre was talking about slipstream, interstitial, new weird, or any other blend, and the literary journals weren’t interested in stories that had surreal/unreal elements unless they were translated from Spanish.

One instructor said it was too bad I wasn’t alive in the 19th century because I might have found a better reception then. Another suggested that I attend Borges lectures in New York (where I was living at the time) to see if I could meet publishers there. But I also had instructors like Nicola Griffith, Lucius Shepard, and Michael Bishop, who were great teachers and encouraged me to keep going.

“Suspension” was the first story I wrote at Clarion.

I had been thinking for a long time about a story based on the four-armed man in René Magritte’s painting The Sorcerer (shown here as a mouse pad!). Also, I had been reading some of Samuel Beckett’s prose and went to several Beckett plays; his work is filled with sedentary characters: people trapped in bed, in piles of sand… One day I was walking east on Grand Street, Lower Manhattan; up ahead was a very large woman. Seeing her, I wondered what would happen if she slipped and fell. How difficult would it be to lift her? That thought led to the man in the snow, which then combined with the Magritte painting, giving us a giant, four-armed man in the snow. I named him Quatrain Brauner (Quatrain for his four arms and Brauner for surrealist Victor Brauner).

The initial draft was third person and had some throwaway humor that didn’t need to be there. The original title was “The Sorcerer”, because of the Magritte painting, which caused unintended expectations—I hadn’t considered that the participants in a fantasy and science fiction workshop would automatically think there would be magic when they saw the title.

In revision, after Clarion, I changed it to first person, and to help me with his snow-bound philosophizing, I read some Frederich Nietzsche. I’ve forgotten what exactly I got from the Nietzsche or even what book it was. There are times (too few) when I find the perfect things to be reading while writing or revising something—I rarely take something specific from what I’m reading, but some thought or feeling or concept gets incorporated into sentence structure or becomes an image or scene. I wish this happened more often, but it’s impossible to know ahead of time what will be the perfect thing to read.

Jason Pettus of the intriguing website the Chicago Center for Literature and Photography (CCLP) has picked my collection Psychological Methods to Sell Must Be Destroyed for his list of best experimental books of 2008. There are some interesting-looking books mentioned, and I’m pretty happy about showing up on a list with M.John Harrison.

I first came across CCLP after I read Jack O’Connell’s The Resurrectionist, a book that had some fine writing but ultimately disappointed me. I was curious what people were saying about it and looked at reviews on Goodreads.com.  Jason Pettus’s review echoes some of the problems I had with the book, and so I clicked on the link to his website, where the review had originally appeared. I looked around the site briefly, planning to return when I had more time. Some weeks later I was looking at a post–on a blog, but I don’t remember which blog—about writer’s problems with reviewers. I clicked on a link to David Louis Edelman’s blog post on standards that a review should follow. The post ended with mentions of some reviews of his novel that reflected these standards, one of which was from CCLP.

After reading Edelman’s post I went back to CCLP, looked around some more, and queried about sending a review copy of Psychological Methods to Sell Must Be Destroyed, and was pleased with the ensuing thoughtful and intelligent, review.

I don’t have a lot of time for reading blogs (or writing one), but CCLP is one I try to visit often.

All contents copyright © 2023 Robert Wexler except as noted